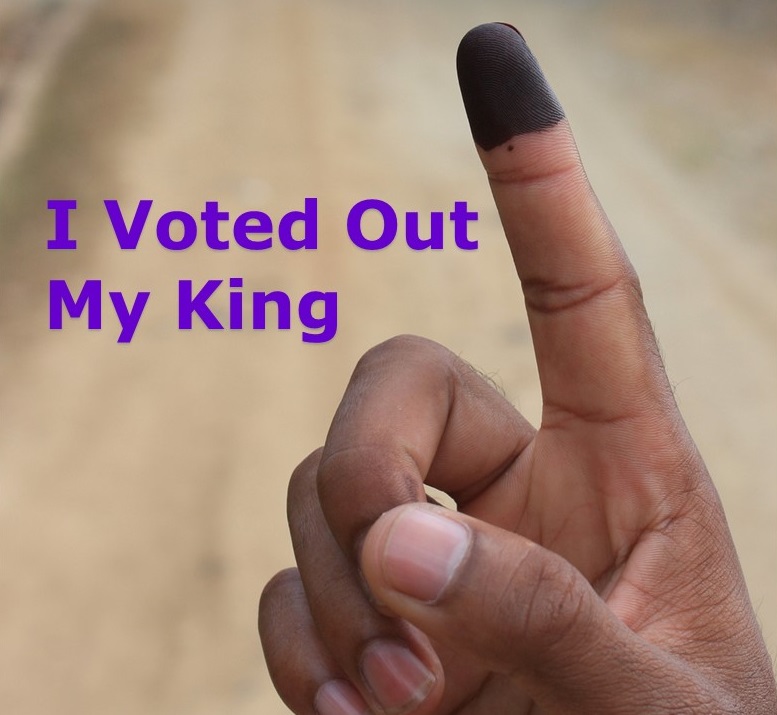 I have my voting sticker, but I wish my finger was purple. Exercising my franchise, I went to my early polling place and voted on the offices and referenda that will govern our civic life.

Walking home from the polling place, I thought of the time in 2008 when I sat at a raucous dinner party in Nepal.  The men I dined with talked eagerly of family, faith, law and politics.  The representative democracy in the United States intrigued my companions and I struggled to recall the intricacies of my civics lessons.

To my immediate right sat a man with a purple finger that looked as if he had whacked it with a hammer.  I asked him what he did to his hand.  He lifted his finger, looked me in the eye, and said, “I voted out my king.”  The ink on his finger indicated he’d voted.

When Samuel Adams and John Handcock began imagining a revolution against England’s King George III, the consolidation of Nepal was completed and a monarchy formed.  Since 1768 the monarchy survived insurrection, invasion, and intrigue until the public ousted the king in 2008.   Just prior to my arrival the Nepalese men and women elected to remove the monarchy and install a constitutional democracy.  The democratic leaders were in the public and messy process of drafting a constitution.

Living in a republic, we in the United States, have the responsibility to elect representatives and shape our future. By voting we make our choices known and to our betterment or detriment, we get the government we elect.  Future U.S. President, James Garfield wrote, “Now more than ever the people are responsible for the character of their Congress. If that body be ignorant, reckless, and corrupt, it is because the people tolerate ignorance, recklessness, and corruption.” (July 1877, The Atlantic)

We no longer need the courage to oust a king or the wisdom to write a constitution. What we require is the attentiveness to responsibly inform ourselves about the issues of our day, check our prejudices, and select the candidates who possess the character to address national and global challenges.  The foundations of our government and the perpetuation of our ways of life depend on our responsible citizenship.