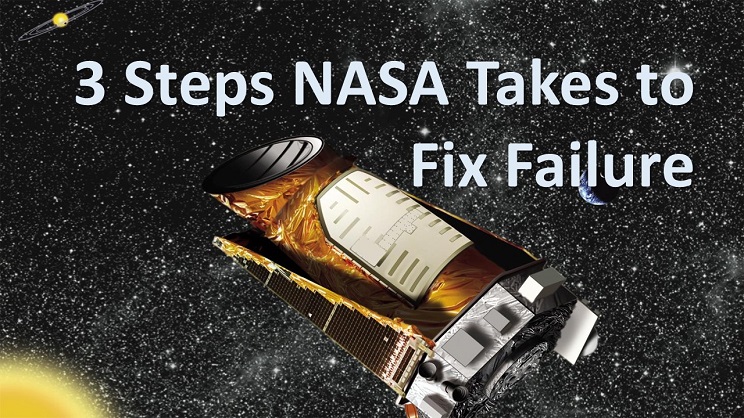 Failure happens and sometimes failure is hard to fix—especially when the failure happens in deep space. By following NASA’s lead, we can fix failure and find success.

Seeking earth-like planets, NASA launched the Kepler spacecraft. The mission went as planned for four years. Then failure caused Kepler to become unstable and spin out of control.  In May 2013, one of Kepler’s four “rotation wheels” failed. Scientists feared that Kepler had become useless and the mission was over.

After working through their usual options, the ingenious NASA scientists decided to harness the power of the sun.  The sun’s energy pushes hard against Kepler’s solar panels. They used this “solar push” as a force to help control the spacecraft.  Instructing Kepler’s three other rotation wheels to push against the solar push, the scientists stabilized the spacecraft which can now focus on specific interstellar bodies.

The resurrected spacecraft made a startling discovery; some 180 light years from earth there are at least 8 planets similar to earth.  And Kepler is still finding new “earths” to explore.

When something goes wrong we often assume that the mission is finished.  By using these three NASA steps we can fix failure and our mission can succeed.

Using the three NASA steps we harness ingenuity and initiative to fix failure and accomplishing our goals.

Please consider making an annual gift to the Methuselah Society for Centenarians where Tim is a founding member.