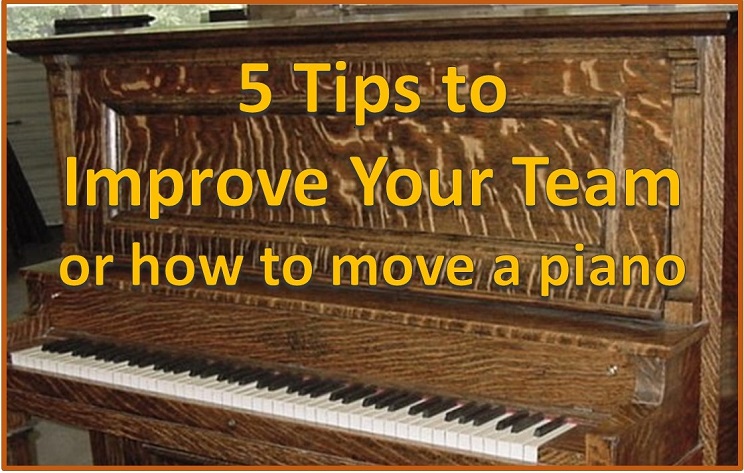 When I was a boy, my family gave our large upright piano to our next-door neighbors.  The neighbors were a South Korean family, headed by a Christian pastor and his exuberant wife.

Since the neighbors were very small people, I wondered how they would move the massive piano out our door, down our steps, across the lawns and up the steps into the front room of the neighbor’s house. Surely, they needed help.

The morning of the move, eight small men arrived at our door.  To my preteen self, these men seemed entirely unfit for the job.  They were little taller than me and were just as scrawny.  I knew I was unfit for the task and was amazed that these men would even attempt such a marvelous feat of muscle and coordination.

Working together, the team of eight assembled around the musical beast, quickly came to a strategy and lifted as one entity.  With speed and grace, they moved across our floor, out the door and down the steps.  I suspected they would stop at the bottom of the stairs. No. The team zoomed across the sidewalks to the neighbor’s steps and up and in the house they went.  As the men set the piano in its new place, they cheered.

My brothers and I followed with the piano bench.  The minister’s wife sat before the keyboard and played as the men joined in a hymn of praise.

The best part of the eight men moving the piano was the singing.  Common experiences build stronger bonds. Together, the eight took pride in their joint effort and success.  Shared joys are the sweetest and most enduring.

As leaders, we are often reluctant to build our teams.  Among our egocentric excuses are

Projects succeed when we empower teams with information and independence. As leaders, we must claw beyond our egos and the perception that we alone must know and do everything.  We can’t and won’t ever have enough capacity to move the piano alone.

What is your secret to empowering your team? Email me and let me know. Tim@ClownClergyCEO.com

Tim Rhodes is a former Ringling Bros. and Barnum & Bailey Circus Clown, an ordained clergyman and former CEO of a $100 million multinational organization.  He is an award-winning speaker, writer and coach. To contact Tim, email Tim@ClownClergyCEO.com

Please consider supporting the husbandry projects of the Canadian College of Hippopotamus Dentistry & its William Claude Dukenfield endowed chair of Ostrich Podiatry.  I am honored to serve as an at-large trustee of this fine institution.