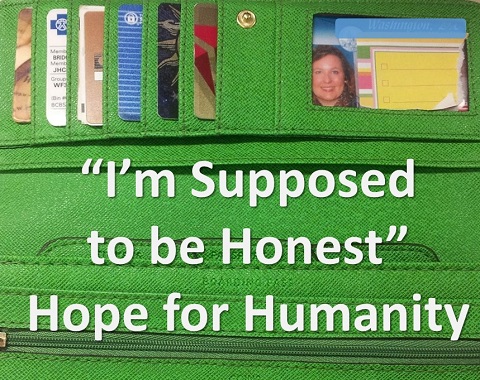 News of shootings, racial disharmony, economic distress and personal despair find us struggling to live out our hopes. Through the thick static of misery, I share a story of hope for humanity.

Elaine Simpson of Birmingham, Michigan visited Chicago for business.  As Simpson was checking out of her hotel she discovered that her wallet was missing.  In her wallet were priceless family photos, credit cards and about $150 in cash. She filed a police report and a hotel worker loaned her $60 to for a taxi to the airport.

Several days later, an envelope arrived from someone named “Sid” in Chicago. The wallet and its contents were almost complete.  Simpson said, “It was so sweet. Sid used three dollars and seventy-eight cents out of my wallet to pay for the postage.”

CBS Chicago’s Mike Parker tracked down “Sid” in Chicago.  Dr. Fazal Siddiqui, (Sid) is a retired physician who said he found the wallet on the back seat of a taxi outside Navy Pier.  “I’m supposed to be honest because I am a Muslim. It’s my faith, my teaching,” he said.

Dr. Siddiqui expressed his humanity by being honest and generous.  He took time and effort to return treasured possessions to a woman he’d never met.  And a hotel worker helped a stranded traveler settle her hotel bill, file a police report and even loaned the traveler taxi fare to the airport.

Simple acts of kindness help heal the world.  How can we extend care and compassion to others and help heal a hurting world?